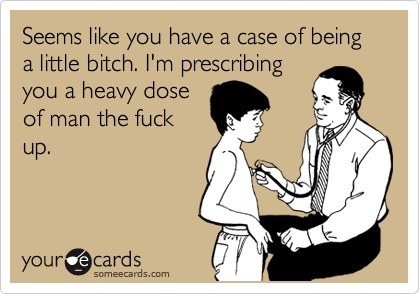 This article will bring on the haters for sure, but f**k it, this is the truth!!

From Philly.BarstoolSports.com: DETROIT, Mich. – The mother of 13-year-old Donell Dixon says he’s been at Children’s Hospital for 7 days after doing push-ups at his school, The David Ellis Academy.  Vinyanda Mitchell says it was a punishment for running in the hall and closing lockers and her son had the choice of detention or push-ups, Donell says he did 100. The Director of the school, Sylvia Green says the coach says it was three sets of 20 and the boys were able to pause in between and drink water. The day after the incident the teen says his arm swelled to double its normal size, so his mother took him to the emergency room. The medical papers she showed Action News says the diagnosis is Rhabdomyolysis, which is a break down of the muscles, often caused by over exertion.

Below is the additional story from the writer where this video was posted:

"Here we go again, the flabby pussification of America.  Kids, moms and mom’s lawyers are lining up outside the emergency room these days with injuries like this.  Didn’t 60 push ups used to be the warm up in gym class?  Apparently today’s middle schoolers don’t do shit in gym.  My buddy who teaches it says they do nothing but have them dance around and shit. Either bring in the Dance Dance Revolution machines or line them up to do salsa and square dancing and macarena.  They pretend it’s Dancing With The Stars.  Huh!?  What the hell happened to pillow polo,  or scooter soccer,   or PICKLE BALL??  To top it off, word on the street is that the Presidential Physical Fitness test is no longer administered.  The powers that be don’t want to make kids feel bad.  Well I’ll tell you what, if even one kid graduates without feeling the humiliation I felt when I got -18 on the V-Sit and Reach, then I’m calling bullshit on the entire institution of gym.  Fuckin suck it up and expose your inflexibility for the world to see.  Or in the case of this pussy kid, your inability to do pushups."

HaHa, I love how he calls "bull shit on the entire institution of gym". In college, our professors are ALWAYS harping on us NOT to use the word "gym" - well, what is done is NO longer Physical Education, only in a few rare cases is there some REALLY good stuff going on in the "gym".

I feel bad that this kid has his arms so sore but at age 13 these kids should be out playing man hunt, chase on bikes, pick up football games or how about 'Kill the Man with the Ball'. If the climbing ropes and gymnastics equipment was still in these schools then the majority of 13 year olds would be strong and fit, 60 push ups wouldn't be a problem.

My ONLY issue with the punishment is that exercises was prescribed as an option for punishment.

Exercise is a GIFT, 60 push ups should NOT be viewed as punishment but, as you can see, society, teachers and administration view push ups as punishment.

Man the F**K UP America, start eating push ups and pull ups for breakfast and stop contributing to the Pussification of America!!

2 years ago I left teaching Physical Education behind. It was something I truly loved, but, with the changed of attitude from parents, kids and the administration, it went downhill quite rapidly.

The administration went downhill to a point where I questioned if they REALLY cared as much as they said. Their MAIN focus was on us writing longer lesson plans, which did nothing to make our students more fit in mind and / or body.

Our continuing education was pure crap, always on CPR and "best practices" - which, in a nut shell, this was the Health & Physical Education Teachers getting together to supposedly talk about what we did best, in the end, we were all pissed that we were learning nothing new and the Admin gave us bull shit work that did NOTHING for improving Physical Education.

After all, teaching is about the kids, right? Hmmmmm...... Just because administration says so doesn't mean it will be true.

I couldn't remember the last time they actually hired someone with a unique expertise in fitness to come in and introduce us to new concepts and ideas. This is like a Strength Coach learning nothing new day in and day out, yet hoping he will become better without learning from others with greater knowledge.

Check Out Some Physical Education from Russia in the Video, Below

Check Out Some Physical Education from Poland, Below

As my years of teaching Physical Education went by, I noticed something that rarely happened during my earlier years... Kids complained if they got tired, some first graders even requested to "not play" - who the f**k doesn't want to play at the age of 6?

Parents wrote excuse letters if a kid told mommy or daddy he / she didn't feel well, which usually happened if the kid didn't want to learn a cartwheel the next day.

The middle school was worst, the kids ALL complained and made excuses.... well, not ALL of them, but countless students complained.

I left teaching because "Physical Education" no longer existed.

The REAL Physical Education is going inside my Underground Strength Gym in NJ. I plan to step it up a notch and make it even better for the kids who step up but we have a HUGE uphill battle as even the parents and administration view exercise as punishment and NOT a gift.

This makes me glad I left the public schools as deep down they say they are "committed to excellence", BUT,.... truth of the matter is, they're full of shit.