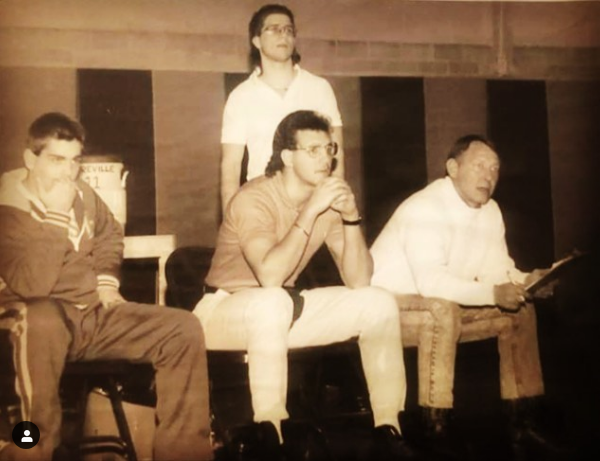 Last week I got the news that one of  my old wrestling teammates had passed away.

I moved out of my old hometown almost 11 years ago.

That town shaped me and molded me, as it did for many others. If you didn't fight back in that town, you got your a-- handed to you.

Thinking of my old teammate, Joe, it reminded me of the tough times we had been through and what we experienced together on the wrestling team.

Joe was a tough SOB. He had to be.

Our Wrestling Coaches; Coach Scott & Coach Rob (pictured above), pushed us to places unknown. Harold, not pictured, scrapped with us every practice while going through pre law in college.

These tough practices were all we knew. I didn't know there were other ways. The tough training broke us down and as a result, we got tougher & stronger. If you want to have a break through you Must go through a break down. THAT is how you rebuild stronger.

Read that last sentence again, will ya?

Again, To have a break through, you must go through a break down.

​
To experience 7 lbs of weight loss per practice was the norm.

If Coach Scott was running our warm up, the pace was brutal. None of this "go take a jog for 20 minutes" bull shyt we see today.

We drilled extremely fast and technique was hammered home, regardless of fatigue. The warm up was wrestling, wrestling and more wrestling.
​
I remember seeing Joe practicing one week when he had a stomach virus. We had a big match coming up and in the early 90s, we had 12 dual meets. You didn't get a lot of opportunity to win and get better through competing. Today, kids wrestle a quad or tri meet every Saturday. That adds up to 5 or 6 matches every week.

Let me tell you, we looked forward to competing because practice was INFINITELY harder than a dual meet!

Back to that practice when Joe was fighting a stomach bug....​

It was mid practice and he calmly walked over to the garbage, threw up, and walked right back to live wrestling.
​
This was 91' so yes, "times were different".

Nobody said a word.

Nobody asked if he was OK.

Nobody stopped and stared.

Getting back to work was NORMAL. And, it was expected. The cops were not called. No parents complained or attacked the AD. It was work as usual. Yep. Exactly.

We never missed practice, even if we were sick. We were too scared of what would happen to us the next day when we returned.
​
It was smarter to just show up and do the work.

I remember freshman year 1 of our Coaches saw 2 of the guys walking the streets while he was driving home from practice during winter break. He announced at practice that these guys would be in for a "special treat" the next time they showed up.

The next day, Coach announced in front of the team that he saw saw them when they should have been training. I saw their faces turn pitch white and I swear to you he sucked the power right out of their bodies.

You could see the fear written all over their faces.

He grabbed a chair and walked into the hallway with the 2 wrestlers. I heard the whistle blowing for 30 minutes. Coach had them doing sprawls and jumps and calisthenics of all types out on the hard hallway floor.

When they came back in they looked like they had just gotten mugged. They were drenched in sweat and their faces had that pale look all over them. They went right to work when they walked back in. It was a lesson for us all.
​
Coach Rob was brutally intense. If this guy would have entered the MMA world back in the early 90s (Back then it was NHB / No Holds Barred Fighting) he would have been on the level of guys like Mark Kerr & Mark Coleman.

Instead, he went into business and applied his mindset and work ethic to succeed at the highest levels.

Early one morning in school, my training partner caught me in the hallway and pulled me aside.

He looked nervous as hell.....

He asked if I could volunteer to have the moves demonstrated on me that day and not him because in his words, "Coach Rob is killing me, man!".

He taught us plyometrics in 1991 and none of us knew WTF he was doing or what we were doing. We were doing squat jumps, knee tuck jumps & jumps combined with splits. I think we were all too young to REALLY absorb what our Coaches were teaching us. They were ahead of the curve and ahead of their time.

I am not sure any of us were ready for what they taught us. I always look back and wish I grasped it and was actually coachable back then.

​
Note the Z Cavariccis, the fanny pack and the mullet.

Those of us who were smart, feared our Coaches.

The smartest guys STILL fear them.

We respected our Coaches because we knew they were giving us their all.

Little did I know back then that all of their lessons would change my entire life. By the way, not every wrestler goes on to apply these lessons to life. Some deny these lessons or somehow don't quite grasp the magic of it all.

Sometimes, in life, you're not ready or even understanding of what you have right now, in this very moment.

In this photo, both Coach Pagach and Joe have now passed on. I am not ready for this sh-t. I never thought that in my 40s life would be harder than ever before, to be honest. I thought I'd be dominating more than ever. But I can't lie to you like so many of these fake social media posts.

Listen. Life is TOUGH. If you don't fight back and keep swinging, you're gonna get knocked out.

Time waits for no one. Life is going by way too fast.

Face your challenges head on.

Without your Health & Strength, nothing else operates at it's highest level.

Get out there and Dominate.