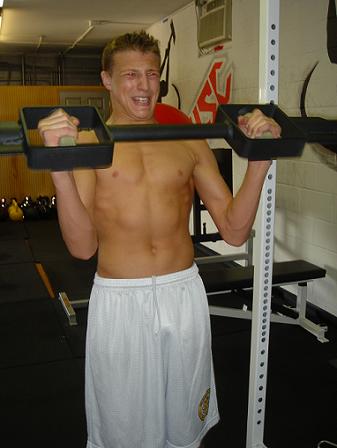 Slightly over 2 years ago a young wrestler began training with us....

He weighed 88 lbs at the time and was 1 month out from wrestling season in which he would be wrestling at 103 lbs.

We had little time to prep before the season and in the first 3 weeks of the season he broke his collar bone during a wrestling match.

When you're weak and have little strength and muscle, you can bet that your ligaments and bones are also weak.

Through the years we trained him with our Underground methods and every year he kept packing on the muscle and adding lots and lots of strength.

Believe it or not, we did not use a whole lot of barbell work....no back squats and no bench presses.

We didn't have the need for them for the most part. Everyone needs something different, we can't prescribe the same thing for everyone all the time, and this was certainly one of those times.

Now we are using a mix of our powerlifting and underground bodybuilding methods with various calisthenics, sled drills and strongman drills.

Pull ups are a regular, sled drags, farmer walks, rope climbs and handstand push ups - these are the things I've been encouraging others to use for a looong time....it beats out one arm preacher curls any day of the week...or is it weak?

Heavy sandbag drills - the type of "heavy" that forces you to wrestle with a bag like it's a Giant Rhino....heavy and awkward.

It was all about attacking the "weights". Whatever Charles lifted, he attacked it.

The result? Take a look at the pics...our homeboy has added tons of muscle to his frame and currently weighs 125 lbs. That's a 37 lb gain in just over 2 years!

The wrestling results? Charles was twice all state, placing 3rd in the state his final year and even beating the eventual state champ once during the season. Not too shabby for the once skinnier than Charles Atlas high school kid.

That was before, but times have changed.

We plan on packing a lot more serious muscle onto Charles before he heads off to wrestle in college.

Stay tuned for the BIGGEST gains ever. Charles has already told me, "I can't wait to be jacked out of my mind!"

Sounds like he's motivated to me! Passion will lead to his success.

P.S. - Want to see the methods we use to transform our clients? Check em' out right here!

P.P.S. - Want to see me in person to grill me and learn my most effective methods? Check out my next BIG event HERE!