Too many Coaches have gotten entirely too nice with athletes and their training. Or, they refuse to learn and refuse to change, in turn doing dangerous and stupid training that either doesn't work and / or injures athletes.

"This is how I always trained....." is what they say. Small minds refuse to change. Small minded people never succeed beyond their own mind. Don't be "that guy". Everyday is a learning opportunity.

I learn everyday, not just from other coaches, but from my athletes as I train them and change things each and every day.

You see, the bottom line is this: It's NOT about the Coach, it's about the kids and what THEY need.

Today, the needs are different for athletes than they were a mere 3 - 4 years ago. Kids of today are showing up weaker, slower, fatter and less motivated than ever before.

There is less and less parental support and kids need someone to BELIEVE in them. I've had many parents give up on their kids entirely. They say, "He's not really motivated so it's up to him".

An environment like what I have created at The Underground Strength Gym pushes the kids to grow, coaching them beyond merely being strong in the gym but also how to be strong in LIFE.

The standards keep dropping. Half squats or quarter squats are being accepted as are bouncing bench presses with a blend of hip thrusts and 3 spotters.

The standards have dropped because too many Coaches don't want to seek out greater knowledge. They would rather have a team with a losing record than to stand up and say, 'Yes, help our team".

The relentless pursuit of excellence has to run deep in your veins.

Around 10 years ago I put out a DVD called 'Ancient Training Methods'. 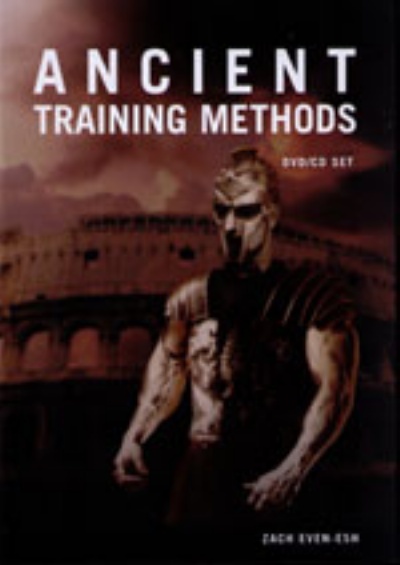 The DVD and the training featured were RAW. Nothing fancy, just getting out there and training like a savage using odd objects. There was training with tractor tires of all sizes for tire flips and sled work, log training, sandbag workouts, truck pushing and overall a bunch of "Farm Boy" work. 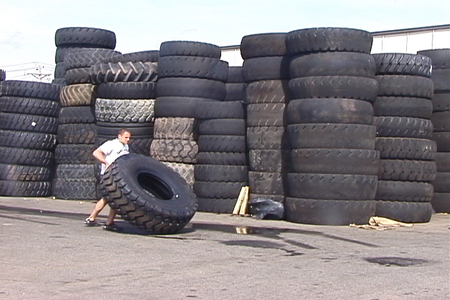 Tire Flipping At The Edison Tire Yard Back In The Day.....

I remember a Football Coach in Ct purchased the DVD and immediately got to work with his Football team.

This Coach was pissed off for greatness as his team was 1-9 the year before.

Immediately, this Football Coach began sending me photos of his team training with tree logs, sandbags, tire sleds and large tractor tires just as I featured in my DVD.

It was awesome receiving these photos of 20 - 30 Football players dragging tire sleds, pressing sandbags and flipping tires. This was blended with the weight room basics using proper technique and progressions. 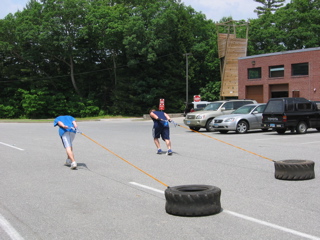 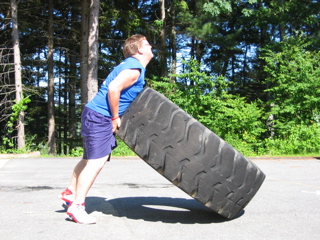 That next season the team went 10 - 1 losing only in the championship round. That's a damn impressive turn around of increasing WIN percentage by 90%!

Training entirely in the gym weight room can be tricky, especially when the "Coach" doesn't hold a high standard or someone is being payed to sit at a desk and sign kids in.

There is no coaching happening, no intensity, no managing of the workouts and you'll find a lot of kids standing around BSing, doing dangerous technique and overall, wasting time!

The athletes get tricked into thinking they are getting stronger with their half reps and weekly testing of a 1 rep max, which, is not necessary for a high school athlete.

As I often say, training for athletes needs to be a blend of science and hell.

Putting athletes through some good ol' fashion Farm Boy Workouts forces the truth to be told. Who can fight the constant discomfort of an odd object without giving up?

Who can wrestle against an awkward tractor tire, water filled keg, 100 + lb sandbag and more? Not everyone gets to do this training either.

It must be earned.

You must build athletes up to this training with a strong foundation of bodyweight training, free weights, sleds and some bodybuilding work to add muscle.

Here's a list of sample exercises that are basic and result producing:

- Lunges of All Variations

Build up that foundation and prepare the body for the odd objects. This takes times and this is why training is to be consistent, not just "summer workouts". You wanna be a BadAss? Then be dedicated and train ALL year. Age doesn't matter. Strong is something we are to live up to everyday.

There are times where I notice my athletes getting comfortable.

They know the barbell will not fight back in the manner that a sandbag or tractor tire will. A young athlete doesn't have the anger and respect when attacking a barbell.

They see it more as I can or I can not. This allows a bit of comfort to settle in. If you know anything about getting strong, it has NOTHING to do with being comfortable.

I break up this comfort by having them shoulder water filled kegs, flip tractor tires in groups with various rep schemes, carry sandbags for distance and then stopping every 50 or 100 feet to perform squats, shouldering or clean and presses.

This teaches the athlete to FIGHT.

Athletes don't often times show up with a chip on their shoulder ready to tear apart the gym. They are often times intimidated, don't know how to squat or deadlift properly and overall, they are too nice.

This isn't just the case for athletes in high school, it's the same in college. When I was at Lehigh last year as the Strength Coach, the first thing I saw was how nice these guys were. Their weight room was also quite perfect.

I had intentions of making things imperfect, to build Gladiators. I brought up kegs and tires for sleds. We trained outside even when it was cold because comfort is evil when training combative athletes. They must learn to get comfortable being uncomfortable.

Beyond the college level, these odd objects are now common place in CrossFit. When I was first running The Underground Strength Coach Certification back in 2008, I had many CrossFit Coaches showing up.

At the time, many CrossFit gyms were smallers and outfitted with a variety of training tools beyond the barbell. The years passed and CrossFit gyms began focusing primarily on barbells, running and some ring work.

I would go to CrossFit Gyms and the dumbbells would rarely if ever go beyond 50 or 60 lbs.

Many CrossFitters could clean and press a heavy barbell but performing 1 arm quick lifts like the snatch or clean and press was a shock to them. At The Underground Strength Gym we have dumbbells up to 150 lbs and we use them!

Today, you see Rogue making odd objects like "the pig" to resemble these awkward motions of strongman training and odd objects.

I am not an "only strongman" guy or "only kettlebell guy". I am a Coach and I do what works. Period. I don't discriminate against the MANY ways we can become strong.

But I'll tell you this. Using odd objects has helped me transform hundreds and hundreds of athletes into meaner, tougher, stronger SOBs. And when it comes to winning, you need every edge you can get in mind, body and spirit.

Don't just be strong under a barbell. Be Strong regardless of stands in your way. 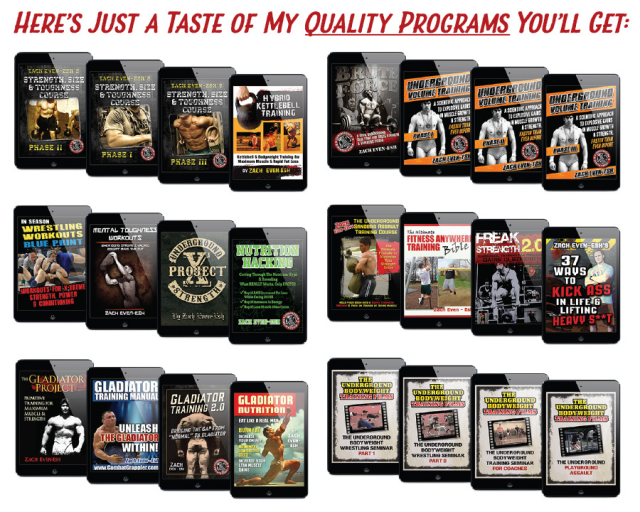