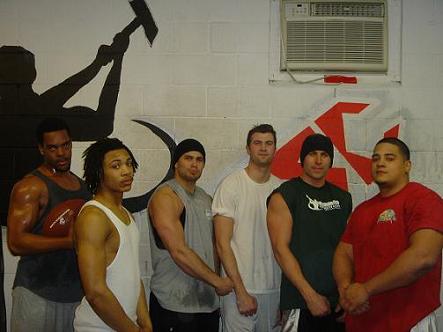 What the heck happens at The Underground Strength Gym?!?!?

Many people are asking....

Well, for one, we train in groups. The energy levels are infinitely higher with these groups. The groups are created after a client is screened through a trial session and then placed in a group that best suits his / her needs.

Not everyone is accepted into our program because we can not allow a half dedicated individual to ruin the powerful chemistry of our groups.

You probably remember me talking about the "Champion's Attitude", well, today, one of the Football groups trained while our Gladiator Crew trained and man did they light that place up! The tires were getting flipped down the parking lot all the way to the edge of the street! I'm sure the oncoming traffic was getting scared!

The music was pumpin' and guys were breaking records left and right. Squats, military presses, pull ups and more were being attacked. Only what works, no time to waste here, no need for useless exercises or workouts that don't deliver the results.

Some of these guys started out barely able to handle 6 or 7 minutes of a workout, no kidding. I thought for sure one of them would quit way back when he started. He was always losing his cookies after dragging sleds or performing calisthenics. His attitude was tough and he stuck with it. Now he sports some thickly developed muscle with some serious strength to boot....I'm tlaking about strength that most people dream about!

But he's not the only one who has made incredible gains...it's all of them. Before training at The Underground they were training the same crap you see in the popular magazines at newsstands. I used to follow that shit and man did it mess me up.

I wish I knew now back when I was competing in wrestling. Now it's my time to give back and pay it forward, helping others who want to make a change from within.

Check out the beasts in the above pic. On your left is LaSalle, who often times RUNS to the gym a good 1.5 miles, except tonight he ran to the gym with his Football! He was visualizing running the ball on the field.

When you combine powerful training and powerful visualization you have an amazing recipe for success.

I am honored to be part of their lives and to be able to watch them grow as athletes and down to earth guys who love to train hard and have fun. This is what made the 'Golden Era' of bodybuilding so special. These guys had great camaraderie. They trained together, ate together, partied together and shared many great times together.

The energy in the gyms from back in the 60's and early 70's was electric and could be felt miles away. I like to believe we have the same thing going on. Guys like Dave Draper would be proud 🙂

P.S. - If you REALLY want a behind the scenes look at how we train our athletes then become a member of http://UndergroundStrengthCoach.com where I post daily the workouts I go through as well as the exact workouts our athletes go through. You'll love getting these insider secrets to our success because you can stop wasting time on the time wasters and get your hands on the result makers!