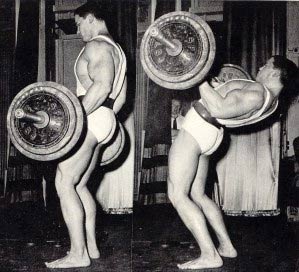 When I was 13 I started getting heavily into bodybuilding.

But what impacted me most was the info found in the original, Arnold Schwarzenneger Encyclopedia of Modern Bodybuilding. In this HUGE book were tons and tons of black and white photos of the rugged bodybuilders from the 50's - 70's.

These guys were more like what I call a "power-bodybuilder".

They developed incredibly rugged, rock hard physiques and man did they motivate me to do the same!

These photos made me feel like I was living during the Golden Era, training with the crew at Gold's Venice and on Muscle Beach.

I would watch Pumping Iron over and over again, and on weekends I would have my Dad drive me to see other gyms in the area as I dreamt of owning my own gym one day.

I wanted a hardcore gym, a dungeon like faciluty where everyone busted their ass and sweated buckets to achieve their goals.

I wanted a gym where everyone understood their purpose, and that was to train your ass off, surround yourself with other highly motivated beasts and to WIN!

Well, whaddya know.... dreams become reality and I own my own hardcore facility. Just as I envisioned.

I believed, I had the guts to make it happen and I took massive action - these are 3 keys to success.

If you want something to happen badly enough, ask yourself if you have followed the 3 steps above.

If not, how about NOW would be a great time?

P.S. - Wanna see what kick started my gym and my business? It allowed me to open up a kick ass gym with barely any investment, while others are out spending tens of thousands and paying loans, I owe not one dime to anyone and continue to kick ass. I am showing the world how I do it, get started HERE.

P.P.S. - Stay tuned, I'll be announcing the next USC Certification course, very likely to be in November!