I am cranking away these videos in my effort to answer requests from my Facebook Fan Page. MAN, this is how I LOVE to do WORK!

Check the video below of a powerlifting circuit I cranked away...

Now, as promised in the video, I told you I would post a highlight video of Fedor in training, which I first saw YEARS ago back in the day when I had a My Space page. The highlight of training had a killer song from the band POD, which you hear me listening to in this workout.

Unfortunately, I can NOT find this video any longer as the number of Fedor highlight reels back in the day were counted on one hand compared to the 300 + highlight videos today 🙁 So, I did my best, see the below, as Fedor trains like an Underground MadMan in old world Russia!

In my mid and late 20s I was continuing to train in BJJ and Muay Thai. I even competed in a NAGA World Championship Tournament after my first 2 weeks in BJJ! ha ha

I lost in an overtime match to a JUDO Black Belt from Team Matt Serra because my opponent had more near submission attempts than I did - hey, after 2 weeks of training I had my wrestling skills and that's it! But, as time went on and my daughter was born I began to lay low on competing in combat as my time became less and I was in no position to deal with injuries that might screw up my ability to train others.

I will eventually find time to get back on the mat and begin training in wrestling and BJJ again. My training in the video above, combining floor presses and deficit deadlifts can be used for a combat athlete easily. I would go a little lighter and crank rounds of 3 - 6 reps on the floor press and 2 - 5 reps on the deadlift.

The deadlift would have moderate weights and the rounds would be NON STOP, no rest between sets, just constant attacking between the 2 powerlifting movements.

A finisher would be a circuit of bodyweight training, sled / prowler work & sledge hammer training for conditioning purposes. 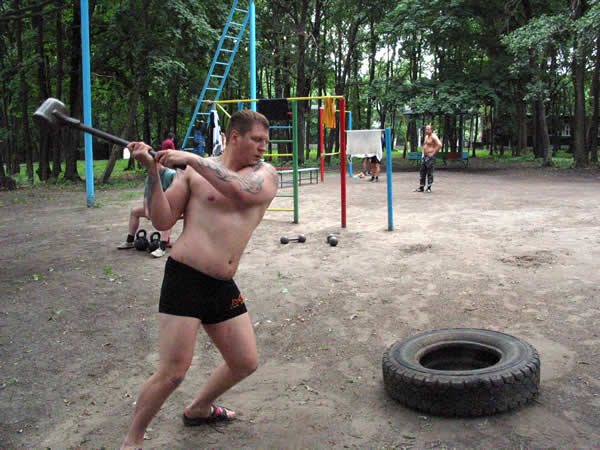 Here's how the above Underground Powerlifting circuit would be tweaked for combat athletes such as wrestlers, mma fighters and BJJ / JUDO athletes:

We would finish off the workout with grip and ab training and of course, soft tissue work.

The workout can become more specific for fighters if we lock down the EXACT sport. Wrestlers might do work for 6 minute rounds, BJJ athletes and MMA fighters for 5 minute rounds, etc.

Regardless of whether you fight or not, I believe it's a solid idea to give yourself some "fighter conditioning" on a regular basis for several reasons.

- You stay mentally tough, you gotta keep the eye of the tiger, losing your edge is NOT admirable

- Being "in shape" is critical, being out of shape is NOT acceptable

- Conditioning work often forces you to crank the stuff you are NOT good at, and that mirrors life, sometimes, you just gotta DO it, even if you don't love it. Once again, giving you another mental edge over the cry babies who avoid being UNcomfortable

In the end, you need to be comfortable getting UNcomfortable.

Earn your respect around here!