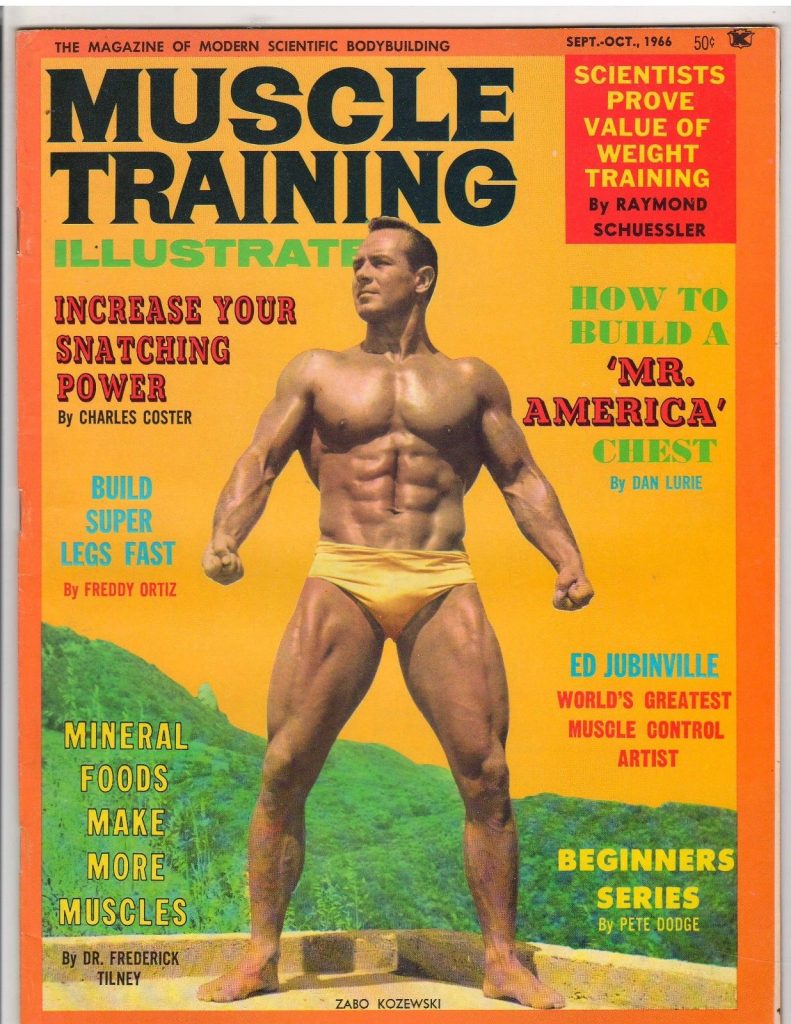 Nothing fires me up more than looking through my old bodybuilding books and magazines.

The magazines from the 50s through the 70s are my favorite. These magazines had information on powerlifting, weightlifting, bodybuilding, nutrition and lifestyle. The Golden Era of Bodybuilding was MORE than what we see in today's bodybuilding world.

Irvin “Zabo” Koszewski was one of my favorite bodybuilders from the early days of The Golden Era so I wanted to make a video on how he inspired me, how he trained (high volume), his nutrition and how I apply some  of his methods to my own.

I also share a story of when I traveled out to Cali in my early 20s and actually met Zabo while he was hanging out at World Gym with some of the Golden Era Legends!

Sample Weekly Training Plan & Nutrition from Zabo is below. 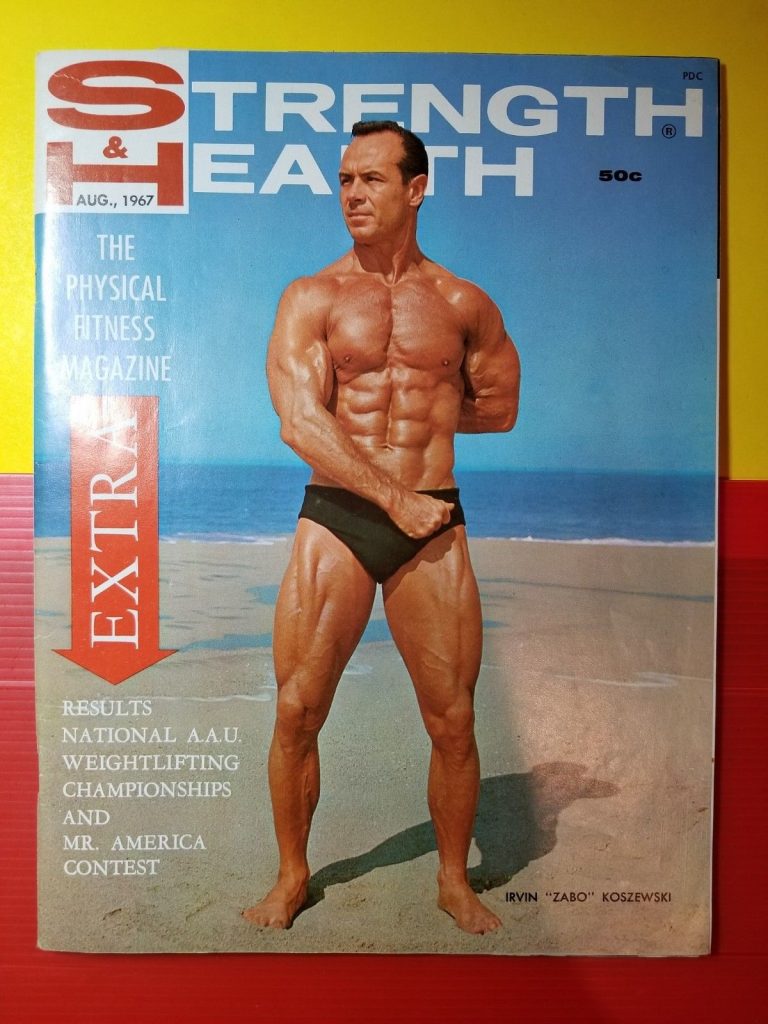 Irvin "Zabo" Koszewski is truly the Baron of Muscle Beaches; Santa Monica and Venice. Without a doubt he is the best known and most popular muscle man in Southern California.

"Zabo" made his appearance in this world on August 20, 1922, and began training fourteen years later. Zabo persevered at tossing the weights for 12 years before he won a major physique contest, the 1948 "Mr. New Jersey" title.

Like his boyhood idol, John C. Grimek, he has never been out of condition. He probably reached the crest of his long career in Portland, Oregon, in May of 1965 when he was crowned the "Over 40-Mr. Pacific Coast."

Collingswood, N.J. High was the place where he attended school and where his father seemed to think he was dawdling his time away at playing. The playing his father referred to, was activities in track and field (shotput and the javelin), swimming and wrestling. He earned letters in all three and was captain of the grunt and groan team. The grand climax of his high school sports career was that of being selected to the all-state team.

A group of teen-agers, which included young Koszewski, acquired a barbell. They trained by the pool side. The chills of winter caused cessation of activities, and then Zabo lugged the weights home and set up training quarters in his cellar. From that time in 1936 until now he has missed very few workouts.

To quote Zabo, "Everything I have accomplished is due to barbell training. I intended to train as long as I live even if it be a hundred years."

Zabo graduated from his cellar gym to the Camden Y.M.C.A. where he attained the title, "Mr. Abs." No one and I mean no one, has won as many best abdominal awards as Koszewski.

The sunny shores of Southern California beckoned and Zabo answered the call. He arrived in Santa Monica January 4, 1951, and started training harder than ever at famed Muscle Beach. The "Mr. L.A.", "Mr. California", and the "Mr. Pacific Coast" awards were added to his "Mr. N.J.", "Jr. Mr. Middle Atlantic", and "Mr. Atlantic" titles. Wherever sub-divisions were a part of competition, Zabo always won "Best Abs."

Due to the fact that there were so many strengthless men entering physique contests in the Los Angeles area, we were forced to set up some kind of a qualification. This was before power lifts had been standardized and accepted by the A.A. U. We of the committee decided that a fair test would be to require all entrants to total three times bodyweight.

If memory serves me right, give or take five pounds, Zabo without a warm-up did a beautiful squat snatch with 220 and asked if that was proof enough. Kiddingly, I said, "No I would like to see performances on the other lifts." He bent over the same bar, whipped it to his chest and made a military press and then placed a 25 pound plate on each end of the bar and did a beautiful squat clean and solid deep split jerk. Zabo stood erect and looked me straight in the eye as he held the weight over head, as to infer, "O.K. wise guy, do you accept this as proof?"

Maybe this doesn't seem like great poundages today, but, this was done by a physique man weighing approximately 170 pounds without a warm-up and too, he lifted barefooted and without any "psyching up".

Zabo does stunt work and bit-parts in T.V. and movies. For 5 years he played the part of a German in the T.V. series "Combat." Speaking of acting, he played the part, I mean wrestling, under the name of "Jungle Boy." If you saw "John Goldfarb" you saw Koszewski in the football scenes.

Zabo manages Joe Gold's gym and though he works out six days a week from 2 1/2 to 3 1/2 hours per workout, I imagine if a close tab was kept on our hero he would be rattling the weights intermittently throughout the day.

Heavy workout days are Monday, Wednesday and Friday and again to quote Zabo, "Saturday is an off day-Hooray -No workout!"

All 5 day schedule of workouts are preceded by:

SUNDAY - He does what he feels like doing in his training.

He calls this his "Goof off Day." His training is done in the early afternoon at Gold's gym and needless to say he trains very fast.

Much swimming in the blue Pacific and running on the beach is done as a further part of his exercise program.

Zabo follows a strict, sensible diet. He eats two meals a day, breakfast and supper which consists of vegetables, fruits, juices, milk, eggs and meat. Before a contest he drops the milk products and for his meat intake, he eats only fish and poultry. This diet is supplemented with an all purpose vitamin and mineral pack, copious quantity of vitamin C plus vitamin E.

Mr. "Abs" has varied interests which include reading of history, chess and art. He likes the outdoors so fishing, both deep sea and fresh water, fall into the spectrum of his likes. He also has a huge collection of jazz and semi classical records which he spends long hours enjoying.

Appearance means far more than measurements to Koszewski, therefore I am unable to give you the tape indications of his body parts. Size and shape, I must admit is far more of a criteria in determining one's physical condition than measurements.

If only we could have more middle aged men in his superb physical condition there would be very little need for tranquilizers and medicants. Too, the late president John F. Kennedy's dream of physical fitness would be almost a reality.

That friends is a thumb-nail sketch of the life, likes, and training habits of Irvin Paul Koszewski.

How inspiring is that article? We don't see articles like that anymore, do we? This was 1967, back when bodybuilding shows were doubled with strength competition with barbells. How awesome is that?

When I was at Diamond Gym, John Kemper held his Diamond Gym bodybuilding show at the beach or pool side. I remember a curl contest where the guy curled 275!

Make sure you see my thoughts on Zabo's training and nutrition, here's that video again.