Blog » F–K Mediocrity & The Tough Kids From The U 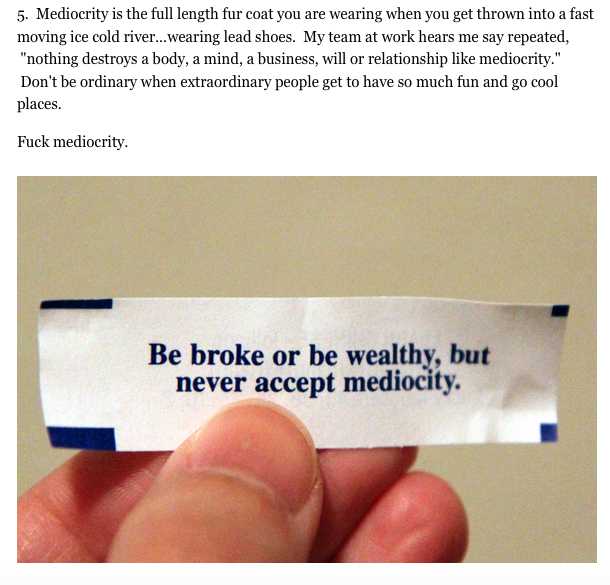 The above pic & paraphrase is from John Welbourn's blog. What does John Welbourn, 10 year NFL Veteran think about Mediocrity? The same as ALL other Successful Ass Kickers. There is NO room in your life for Mediocrity. Note the spelling mistake on the fortune is part of the IRONY behind accepting little mistakes.

Quite often I feel like a man all alone on a stranded island.

Where the hell are all the dedicated, hard charging SOBs I ask myself?

Still, I get e mails and messages on the daily asking me how I stay so motivated and hungry to succeed in all areas of my life. 1 of the BIG reasons is because I HATE Mediocrity. I HATE 2nd best or 2nd place.

It wasn't always like that. I didn't start getting that inner drive of being pissed off for greatness until I was 19 or 20. Some athletes have this inner confidence and drive at a very young age. I didn't.

I have "normal" human tendencies and thoughts like the majority of other people.

Yes, Sometimes I don't feel like doing it, BUT, I STILL do it.

When I get frustrated with hearing the common excuses of....

I end up wanting to run through a wall. I end up bugging my friends who are also pissed off for greatness, most of whom live nowhere near me. It keeps me on the straight and narrow to hear the simple feedback to simply ignore those who don't care and focus on those who take action.

Head down, blinders on and keep grinding upward and forward.

In a recent conversation, 1 of my friends replied to my text message and said....

"You're a wrestler. You understand work ethic and intensity and you love the work. You are passionate. 99.5% of people aren't passionate about anything in their life and so they will NEVER understand who you are and what you're about. They just won't value it."

He's right. There's not a lot of people out there who are passionate.

They're totally cool with being mediocre and average.

In fact, they are often delusional and don't give 2 f--ks about being awesome. They're simply happy to be part of the team, even a team with a horrific losing record.

Try teaching someone how to win as they get older if they've never been motivated to win before and let me tell you, it gets brutally difficult. People get comfortable in the comfort zone of merely existing. Plain and simple, Life is easy in the comfort zone.

Choose which side of the road you are standing on: Mediocrity or Kicking Ass & Taking Names. Stand for something or fall for anything. I KNOW exactly where I stand.

This brings me to a documentary I saw a few days ago. I had heard a bit about it and finally, I had a quiet night and decided to actually sit down, unplug and watch some TV.

The thing that struck out to me about The U was that as soon as The University of Miami began recruiting kids from the rough & tumble towns inside of Miami, they started kicking ass.

From ESPNs info on this Documentary: Coach Howard Schnellenberger scoured some of the toughest ghettos in Florida to recruit mostly black players for his team. With a newly branded swagger, inspired and fueled by the quickly growing local Miami hip-hop culture, these Hurricanes took on larger-than-life personalities and won four national titles between 1983 and 1991.

Before Coach Schnellenberger started recruiting kids from the tough streets of Miami, the Football team was unimpressive and attendance was dwindling more and more.

Finally, the team began achieving success when A bunch of Tough SOBs who understood how to play street ball, how to fight for their own lunch and how to be tough were ready to attack their training. Their Coaches pushed them to achieve the highest levels of success and they were unapologetic for dominating other teams, not just winning.

Do NOT feel bad if YOU are winning and dominating. Everyone has the same opportunity to work their ass off and be dedicated. Success is not an accident.

Compare the street tough players from The U with a spoiled town bunch of kids who have no reason to stand up for themselves and nothing to fight for and 99% of the time those athletes will NOT be tough. Life will have been too easy for them. There's no reason for these kids to be pissed off for greatness unless they stand up and CHOOSE to be Great.

Again, success is a choice you get to make. Change your environment if you need to. Do what must be done. Period.

Look at Serena and Venus Williams. They began playing Tennis in Compton where their Tennis coach would have to clean the courts off from needles and other trash. Gun shots and sirens would be heard in the background.

Coming from Compton and then competing in Tennis became a gift to them. It was a privilege. They were TOUGH.

Don't spoil yourself and if you're a Coach, don't spoil your athletes. Train them farm boy style and push them to be STRONG beyond the gym. Be STRONG In Life.

Enough talk. Time to do the work.