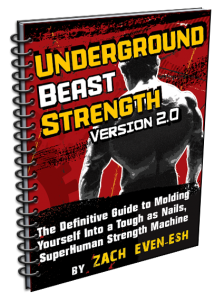 "WHAT IF......" - What if one day you can't get to the gym? You're too busy, "life" happened.... Now what? - What if one day you show up and your gym is locked.... maybe out of business, shut down? Would you wait until tomorrow? Would you wait for the perfect moment.... the perfect workout.... when the time and the place were just right? … END_OF_DOCUMENT_TOKEN_TO_BE_REPLACED

Above, Jesse, before The Underground and 2 months after. Below, a compilation of Jesse's progress through the months at The Underground Strength Gym. Tales of an unlikely BEAST..... Dude shows up at The Underground looking to prepare for his future.... classified shiz, NO joke. Former collegiate fencer, pissed off at his physical abilities, motivated like hell to become a BEAST. He changes hit nutrition, gets rid of the crappy carbs and chows down on loads of fruits, veggies, trail mix … END_OF_DOCUMENT_TOKEN_TO_BE_REPLACED

Matty Wichlinski calls this a Freestyle Fighter Barbell Complex. Matty and I tore up a 1 Day Underground Strength Coach Cert this past Saturday at his gym. The night before we had some good grub, GREAT conversations and a few brews :) I even witnessed a dude get caught stealing liquor from a 7-11. Yep, in the "South" people are buying beer, wine and all types of liquor from 7-11. Strange. Check out Matty in action below, the Dude is a straight up BEAST! If you missed The Va Beach … END_OF_DOCUMENT_TOKEN_TO_BE_REPLACED

Check out Part II of my last workout video, 5 Rounds of Hell, The Underground Strongman Circuit. I step it up a notch, NO limits, hitting 60 lbs on the chin ups. Round 3 starts getting tough, Round 4 was Brutal and Round 5 kicked my ass BIG time. After 3 Rounds this workout was purely mental. It woulda been easy to call it a day, but I was dead set on completing 5 rounds. Not all workouts look like what you see above. Yesterday's workout was: Squats: 7 x 3 Reps Deadlifts: 10 x 2 Reps Later … END_OF_DOCUMENT_TOKEN_TO_BE_REPLACED

Wanna get strong as Hell? Or, in Dan John's words, "this one exercise will make you awesome" Watch this short video. That's me, throwing around a 130 lb dumbbell. The movement: The 1 Arm Dumbbell Clean & Press. Equally awesome with a barbell. I suggest you do it. And do it often. Remember, for REAL world results, you gotta train with intensity, passion, a plan and you need to move weight. Be a BEAST. Become the Hunter, NOT the hunted. Till the next time.... --Z-- … END_OF_DOCUMENT_TOKEN_TO_BE_REPLACED