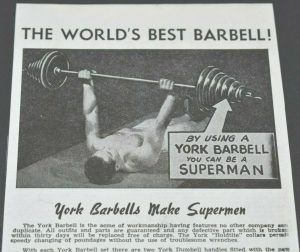 I snagged a recent e bay auction with 600 lbs of vintage weights from York Barbell, Wonder Barbell, Jackson Barbell and Heathway Barbell. Little did I know this gentleman (who's identity can not be identified) had a BEAUTFUL Vintage York Barbell Gym in his basement. It was also cool AND ironic to see all the York Blobs he was selling on e bay and 1 of them was won by none other than the Grip King himself, Richard Sorin. It was ironic because I had JUST spoken with Richard by phone … END_OF_DOCUMENT_TOKEN_TO_BE_REPLACED